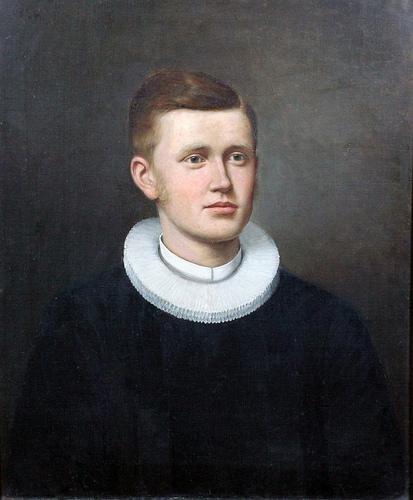 Herbjørn Gausta was born in Norway in 1854, and immigrated to the United States at the age of thirteen. He settled in Harmony, Minnesota on a farm with his family. In 1872 he attended Luther College, studying in the parochial program, leaving three years later to study in Norway at the Knud Bergslien’s Academy of Art, and in Germany at the Munich Academy of Art. At the latter, he won the prestigious academy medal. He returned to America in 1882 to Chicago, Madison, LaCrosse, and finally Decorah, Iowa to teach at Luther College 1886-1887. He traveled to Europe on three more occasions, and after Decorah lived in Minneapolis.

He painted portraits of Norwegian-Americans, four hundred altarpieces, drew caricatures, and created copies of masterworks for extra revenue. During his early years his paintings were well-received by the public. For an exceptional talent for painting, Gausta is considered by many as the best known Norwegian-American artist during the early twentieth century.

Gausta exhibited at the following:
Minneapolis Industrial Exposition Art Exhibitions; Minneapolis Society of Fine Arts; the Minneapolis Art League; the Norse-American Centennial; “Scandinavian Paintings in Northfield;” “The Divided Heart: Scandinavian Immigrant Artists 1850-1950” at the University of Minnesota; “Norway in America” in Norway; and “Paintings by Minnesotans of Norwegian Background, 1870-1970” for the Minnesota Historical Society.