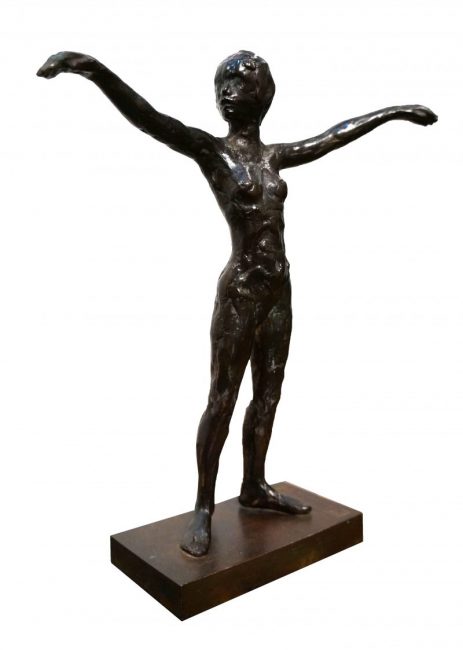 Paul Granlund was born in Minnneapolis, Minnesota to Reverend Clarence and Naomi Granlund. He received his Bachelors degree at Gustavus Adolphus College in St. Peter, Minnesota in 1952 and earned his Masters of Fine Art two years later at the Cranbrook Academy of Art in Michigan. While in Michigan, Granlund earned the distinguished Fulbright fellowship and studied sculpture in Italy. He also earned a Guggenheim Foundation a few years later which allowed him to return to Italy in 1957 and was able to stay until 1959. During this time Granlund was able to learn classical sculpture techniques and incorporated this into his work.

Granlund returned to Minnesota in the 1960s and was a faculty member at the Minneapolis College of Art and Design. He also became a sculptor-in-residence at his alma mater at Gustavus Adolphus College in 1971 and created his work there until his retirement in 1996. He won the Minnesota Governor’s award for a Vietnam War memorial, the Five Flags Plaza Bicentennial sculpture competition in Dubuque, Iowa, and the sculpture competition called “International Year of the Adolescent” by the Wilson Center in Fairbault, Minnesota.

Paul Granlund has created more than 650 artworks and is recognized as one of the most important sculptors in the United States. His wonderful sculptures can be found in public and private collections throughout the world.  Some of his notable pieces include his sculpture of Charles A. Lindbergh at Le Bourget Field in Paris, and “Constellation Earth” in Nagasaki, Japan. His work can also be found throughout Minnesota in places such as the State Capitol, Gustavus Adolphus College, the Mayo Clinic, St. Olaf College in Northfield, and St. Joseph’s hospital in Mankato. Granlund passed away in Mankato in 2003.