Robert Koehler was a German born artist who moved to Milwaukee, Wisconsin in 1854. Koehler was primarily known for his portraits, landscapes, genre scenes and was also a highly accomplished lithographer. While in Milwaukee, Koehler went to the German-English Academy to study drawing and was taught by Henry Vianden. Koehler continued to study under Vianden while he apprenticed at Seifert and Lawton which was a lithography firm. Vianden encouraged Koehler to study in Munich and he finally did in 1873. Koehler was only able to study at the Royal Academy in Munich for two years because of his financial constraints.

Upon his return to the United States he lived in Milwaukee briefly working as a lithographer, but moved to New York City and became one of the founding members of the Art Students League. While in New York, Koehler became good friends with a wealthy brewer who financed his return to Germany in 1879. During his return to Munich, he won medals from the Academy and was elected as the President of the American Artists’ Association.

Robert Koehler returned in America in 1892, where he set up a studio in New York City painting mostly portraits. He went to Minneapolis the following year and would spend the remainder of his career there. While in Minneapolis, Koehler served as the Director of the Minneapolis School of Fine Arts and painted many city scenes. One of his most famous paintings is Rainy Evening on Hennepin Avenue (ca.1902) which hangs in the Minneapolis Institute of Art. 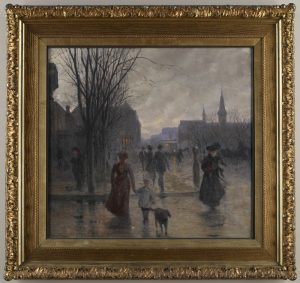 Koehler employs a linear perspective to capture the broad avenue and achieves spatial effect by placing his wife, son and dog in the center foreground with a fashionably dressed woman to their right sharing the focal point of the composition. Koehler delicately assembled the composition to reflect his strong understanding of spatial depth. The trees to the left and the steeples to the right along with the street car off in the distance all help enhance the depth and space of the composition. The old Minneapolis Central Library is shown in the background, which suggests this scene takes place near 10th street and Hennepin avenue in Minneapolis. The muted color and soft brushstrokes help evoke the atmospheric effect of that rainy evening. The misty air and the lights and shadows are shown reflecting along the gleaming surfaces. The soft and loose brushwork closely resemble a tonalist approach and recalls similar stylistic qualities to that of James McNeill Whistler whom Koehler had met earlier in his distinguished career.

Hiro Fine Art is especially interested in paintings and prints by Robert Koehler.