The Studio was the first Native American painting program (1932), held at the Santa Fe Indian School, New Mexico. The class did not discuss art theory, art history, and modern art movements. Prior to the class, Native American art was created for ceremonial and social purposes. The program encouraged students to create tempera paintings that derived from traditional communal scenes, using flat forms. The mural below shows Houser’s style prior to specializing in sculpture. Just two years after The Studio began, artist Allan Houser joined in 1934 at age twenty. 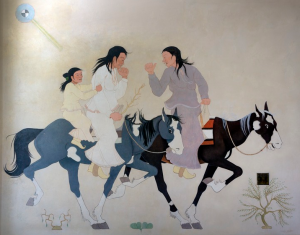 Allan Houser, Mural at the Department of the Interior building, Washington D. C., 1939-1940

The artist Allan Houser was born June 30, 1914 into the Warm Springs band of the Chiricahua Apache tribe in Oklahoma. He was forced to attend a boarding school for one year. After studying at the Studio for four years he exhibited in major venues such as the National Gallery in Washington, D.C., the Art Institute of Chicago, the World’s Fair, and the Golden Gate Exposition. During the second world war he worked at a refinery in Los Angeles, learning about Western art, although the perpetuating racism barred Houser from practicing there. His first time working in sculpture began fourteen years after painting through a commission for a stone war memorial. Self-taught, he used the book Sculpture Inside and Out to learn how to manipulate the sculpture medium. He received awards and commissions following the memorial. 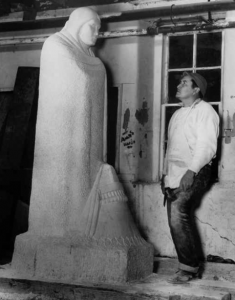 He is known as a patriarch of American Indian sculpture, as he taught a “staggering amount” of students. Houser taught at Intermountain Indian School in Utah for ten years before starting the sculpture program at the new Institute of American Indian Arts in Santa Fe, New Mexico. Through these prominent roles he helped define the possible directions for contemporary indigenous art. He paved the way for others to experiment with style, technique, and media. He retired in 1975 to work full-time as an artist; during this time his vision as a figurative sculptor was realized. 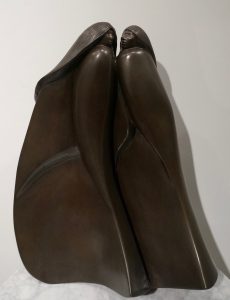 His unique approach combined Native American subject matter with sleek, simplified forms of Western modernist style. This synthesis is evident in Young Friends and Respite, shown above.  The artist stated “I want my work to reflect the heritage I am proud of, but I also want my work to reflect the full range of what I’m capable of doing.” His approach allowed him to experiment with abstraction and other modern styles, charged with the passion of his beliefs and social values. Houser conveyed information through tiny details, such as hair styles. Yet by muting clothing details, he created timeless form in his sculptural work. His mature, trademark works simplified and reduced features into fluid, exaggerated planes. Allan Houser’s utmost legacy is his role in redefining the way art created by Indigenous citizens is made, viewed and understood, by both Native Americans and other Americans. 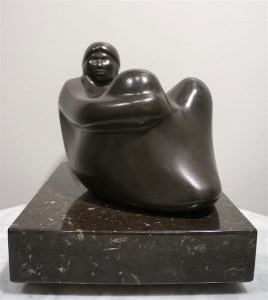