The Art and Sculpture of Minnesota Artist George Morrison

George Morrison (1919-2000) was a Native American, Chippewa artist who grew up along the shores of Lake Superior in Chippewa City, Minnesota. Though he spent almost three decades in New York before returning in 1970, he always called Minnesota home. In his home state he was admired by regionalists for defying stereotypes through the integration of Native American heritage and modern art.

The artist George Morrison grew up surrounded by Native American practices and the great Lake Superior immensely motived his work as an adult. During his childhood, him and his siblings often endured the frigid temperatures of the lake simply to swim in it for fun. He played with many Native American children, but recalled feeling a lot of prejudice from others. Perhaps this feeling or a desire to create art individually led to his preference for being alone; he regularly retreated away from others to draw and copy things out of books. He would also search for perfect wood pieces to carve into or arrange to make objects. All of these childhood experiences would later influence his art.

After graduating high school in Chippewa City, he studied at the Minneapolis Institute of Art where he encountered the European traditions of Cubism, Expressionism and Impressionism. He and other students began to separate themselves from academic painting and started to gravitate towards the avant garde in New York. He moved from Minnesota and studied at the Art Students League of New York. He spent almost 30 years painting among well known artists who practiced Abstract Expressionism, Surrealism and abstraction and felt free to experiment with modernism. Morrison was featured around the country at exhibitions like the Whitney’s Annual Exhibition of Contemporary American Painting and was admired in Minneapolis in the First Biennial Exhibition at the Walker Art Center.

He eventually married and he and his family spent summers at Cape Cod in Provincetown. They often walked along the beach, collecting drift wood that Morrison imagined to have floated in from all over the world, each one showing a different past through its chipping paint or rusty nails. With his love for creating with this material, he began to move into wood collages.

The artist George Morrison felt a need to return to his roots and gave up his position at the Rhode Island School of Design. He applied to the University of Minnesota, where he taught American Indian studies as well as studio arts. In Minnesota, his work was admired by a new regional audience as he integrated media and themes that were connected to his Native American heritage with his practice in composing modern art. He continued to work with wood collages made from found wood at Lake Superior, collaging wood fragments into interlocking compositions. His collages became increasingly popular in the Twin Cities, hung on walls, decorating the building exteriors including the Minneapolis American Indian Center, and adorning furniture, as seen in Wooden Collage Table (figure 1). The collages not only moved beyond abstraction of natural elements celebrated by indigenous cultures. The works communicated appreciation for natural landscapes by communicating subject through form and titles. Morrison spoke of finding a landscape in all of his collages, each assuming a different mood. Some are rugged and left to look aged while other are refined, sanded and stained. The pieces housed at Hiro Fine Art fall into the later category with smooth surfaces and deliberately shaped contours.

His wood work does not embody the traditional or stereotypical aesthetics of Native American work. Many debates have been posed surrounding how Morrison’s ethnicity informed his work: was he a Native artist or an artist who happened to be of Native descent? In the early years of his career, Morrison was considered too extreme to be labeled a Native artist, although this shifted later on. He became known for work that embraced his heritage and bore a sense of spirituality. He ingeniously utilized abstract forms, that he was familiar with through school, to communicate Native American values from which he was raised. Wooden Circle (figure 2) speaks of the value of community. Made of small pieces that show respect for individuality, they simultaneously link together to create wholeness and unity. Inspired beyond his tribe by Native American societies of the Southwest, he also created totems. The fusion of Native emblems with modern form as influenced by Constructivism and Minimalism informed such pieces with unconventional, noteworthy aesthetics. Though most are monumental in scale, Wooden Totem (figure 3) embodies these unique practices in an intimate, perhaps more approachable height.

Inspired by the grain of wood, Morrison created many lithographs and drawings. Referencing ribbons of grain, he created skies, horizons, grounds, and water in many works, even a cityscape, #12 City Scape with Chrysler Building (figure 4). His geometric abstractions used technical precision in order to create deliberately formed curves and straight edges to evoke a cubist feel, seen for example in the unrelenting winding in  Untitled (figure 5). Similarly, the lithograph Ice Jam (figure 6) playfully evokes cubism and surrealism with its illusion of infinite expansion and texture.

In addition to wood media, the artist George Morrison was acclaimed for his paintings of landscapes, cityscapes and still lifes, as well as pieces of pure abstraction. During the last few decades of his life, Morrison traveled between the Twin Cities and the North Coast. Surrounded by the natural setting, he painted Lake Superior with vivid colors and unexpected textures in abstracted landscapes. This approach to nature is exemplified in his work Light of the New Day. Dialogue of the Shore. Red Rock Variation: Lake Superior Landscape (fig. 7). The painting assumes abstract form, even subject matter. However, when one notes the artist’s reference to Lake Superior in the title, we learn that the painting is more than built-up paint upon a surface. It was composed in a manner that communicated his unique experience of a natural place and his own spirituality. His failing health lead him to stay settled in the Northern part of Minnesota until his death in 2000 where the artist George Morrison continued to create smaller pieces and drawings as well as be an active member of the American Indian Movement. 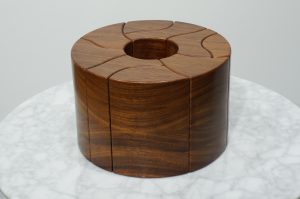 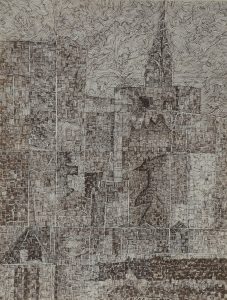 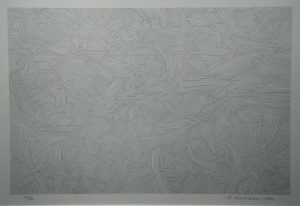 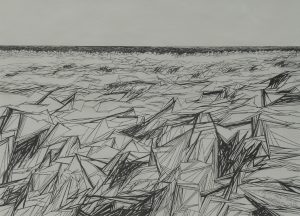 Browse more artworks by George Morrison and read more about his biography here.