American artist Cameron Booth is recognized for sensitivity to his surroundings and a deliberate approach to composition. His paintings began with a theory before action, experimenting and molding his style through prolonged cerebration, relying upon calculation rather than instinct. An intense feeling for pictorial structure combined with the expression of subjects and colors persisted throughout his oeuvre.

His legacy as a prominent Minnesota artist was developed as a thorough interpreter of the Minnesota landscape, along with influence on local artists and prominent positions held in organizations, which include: the Minneapolis Institute of Art, the Walker Art Center, The University of Minnesota and the campus Frederick R. Weisman Art Museum, Minneapolis School of Art and Design (formerly the Minneapolis School of Art), the University of California-Berkeley, and the Art Students League of New York. While teaching at the University of Minnesota, he taught the later pop artist James Rosenquist, who described his mentor as an unbelievable colorist. 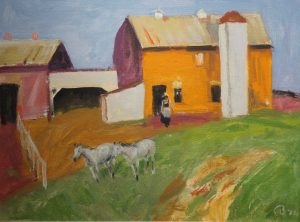 Though born in Pennsylvania in 1892, living on farmlands in Iowa and studies in Minnesota fostered his affinity for capturing the Midwest. Booth entered the profession of painting through an interest in the subject of horses, early inspired by his pony, Topsy. Barnyard Landscapes featuring horses was a favored subject by Booth, focused not simply on horses, but the time of day and season, and especially the mood of the scene, emphasizing painting serenity of scenes and areas of color, over the representation of nature. Cameron Booth often begun with sketches and references to horse breed and anatomy sheets hung on the walls of his studio, but translated the animal into forms of movement and rhythms of color on the canvas surface. 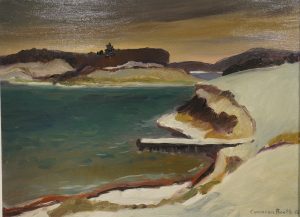 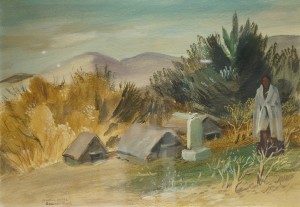 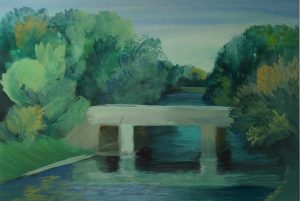 Lake of the Isles

Traveling Northern Minnesota, Booth produced Social Realism paintings on Native Americans and their reservations, for example, Onigum Bay and Chippewa Burial Grounds. Observations in central Minnesota ignited a fascination with bridges and underpasses, prompting the artist to interpret Minnesota rural and urban landscapes such as Lake of the Isles. His style representing manmade subjects reflected Post Impressionism in forming a scene with emphasis on color, form, and emotional response. Though Art News regarded Booth as a leader of Regionalism, or rural depictions, he rejected the categorization based on his passion for extending the scene beyond representation into an abstract rendition which negated the subject, instead prizing the expression or idea of the subject. He transformed simple scenes into ideas involving the forces of natural elements, change or growth, and the structure of living organisms.

Witnessing the 1913 Armory Show in Chicago along with time spent in Europe introduced him to Abstraction, Cubism and Italian Primitivism. Teaching in the Art Students League exposed him to Abstract Expressionism, participating in the first major American movement. Cubism was to retain a lasting effect on Booth’s approach to composition and formal relationships, and Abstract Expressionism through the language from which he interpreted landscapes. He furthered his practice through a classic approach that emphasized the structure of Cubism, always organizing space based on geometry. Such discipline devoted to continuous sketching and studying formal relationships imbued his abstract work with a quality which considered the total affect of the arrangement of forms.

Booth stood apart from European abstraction, remaining closer to the practice of contemporary American artists through the application of abstract principles of organization to recognizable subject matter. His utilization of color was romantic, as was the harmony of parts into a unification of the whole. Success in color expression combined with controlled form and cerebral composition distinguish the work of Cameron Booth.

To read more on Booth’s training, see his condensed biography.