Wanda Gag and Clara Mairs are two quite well-known artists that created artwork in Minnesota. The first generation of women artists from Minnesota that are recognized today includes many of the women artists that we, at Hiro Fine Art, purchase and sell. What these two women, along with others such as Frances Greenman, Alice Hügy, Jo Lutz Rollins and Ada Wolfe shared was their modern approach to life and art. At a time when Americans were striving to set themselves apart from European Art, Mairs and Gag were outspoken and created individual styles. The 1949 Minnesota Territorial Centennial exhibition celebrated Minnesotan artists and the culture of the state as developed over the past hundred years. Gag and Clara Mairs were among the artists exhibiting in the show. Their inclusion signifies the importance they held in the Minnesota art scene. 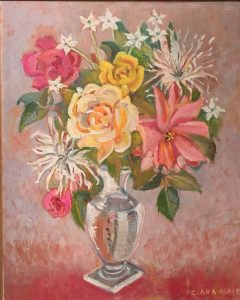 It was not until the turn of the century that art became a realistic alternative to teaching and nursing. Women flocked to the new art schools. In their own ways, women artists served as examples for the forward-looking “New Woman.” Although art became an acceptable career for women, they were often expected to create floral still lives or paint children. In this floral still life, Mairs does in fact paint a vase of flowers, but her modern approach seen in abstraction through color and remaining brushstrokes sets her aside from the previous generation of realistic paintings that were often lacking in expression. 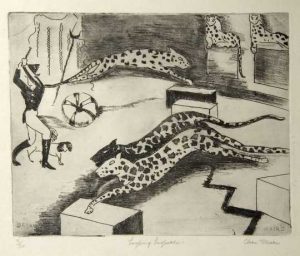 Clara Mairs was born in Hastings, Minnesota in 1878, moving to St. Paul at age thirteen, where she remained for most of her adulthood. She studied impressionism at the Pennsylvania Academy of Fine Arts and, in 1923, traveled with companion Clement Haupers to Paris, Italy and Algers to study sculpture and painting. By 1928 she was back in Paris creating prints, textiles and zoo inspired tapestries. Her print Leaping Leopards was reproduced in Fine Prints of the Year 1930, and other were included in 1932, and 1938. She continued to create work with the subjects of zoo animals and circus scenes as well as of children and Old Testament stories, often with satirical humor. Her style was often loose in form and line, simplified even, with a tilted perspective. She excelled in the use of applying patterns and lavish colors.

Known for her book Millions of Cats, printmaking, illustrating, and painting, Wanda Gag was also born in Minnesota and spent her career here. She was born in 1893 in New Ulm, Minnesota. Her childhood home in the Queen Anne style as designed and decorated by her painter father was inhabited by Gag between 1897 until 1917. The restored Wanda Gag House in New Ulm is open for public tours. For her training, Gag attended the St. Paul School of Art, the Minneapolis School of art, and the Art Students League, New York. While in New York, Gag liberated herself from her Art Nouveau student work into a German Expressionistic style.

Following art courses, Gag sold cards, bookmarks, and ran a comic strip in the Minneapolis Journal, in order to financially support her mother and siblings. In addition, she created commercial art including painting lampshades, making batiks, designing toys, and drawing fashion illustrations. She began printmaking before illustrating and publishing her children’s book Millions of Cats in 1928. The book has never left print. Her recognition as a printmaker may be witnessed in rich shadow and the strong, sinuous lines of her work, which often depicted interiors and rural landscapes. The paintings Ploughed Fields and Barn exhibit these features through strong use of mesmerizing lines, patterned color, and tonal balance. As described above Gag held the ability and finesse to work in a variety of mediums. Clara Mairs similarly experimented with and embraced a variety of media. 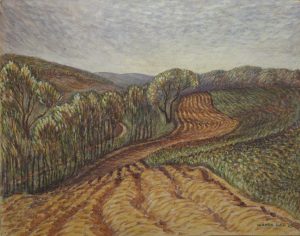 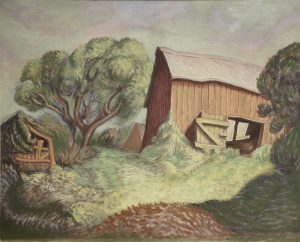 Gag’s greatest contribution of art occurred in the 1920s and 1930s. Gag was influenced by the German-Bohemian (now Czechoslovakia) immigrants that founded New Ulm and the peasant lifestyle that she grew up with, such as German music and literature in her house. Rather than following social norms, she embraced the new Bohemian artist philosophy of art as life, radical politics, free love, and sported a pageboy or bobbed haircut and peasant blouses. Many of the women in the first generation of Minnesota artists were influential art instructors or community leaders who established galleries or clubs. For example, Mairs inaugurated both the Art League of St. Paul, and the Nimbus Club, which allowed artists to work from a live model. Gag’s local influence was more indirect; she acquired national fame with her prints that in turn garnered more attention to the Minnesota art scene. Though these women had strong reputations, the rise of Abstract Expressionism and male-dominated movements overshadowed them by the middle of the 20th century. Although they are given little attention within the art-historical cannon, they are increasingly gaining more recognition. Post-humorous exhibitions featuring the work of one or both artists include: “Clara,” U.S. Bicentennial Celebration, 1976. “In Her Own Right: Minnesota’s First Generation of Women Artists,” Minnesota Museum of American Art, 2007; “Draw to Live and Live to Draw: Prints and Illustrations by Wanda Gag” Tweed Museum, 2008-9; “Power Couples: Selections from the Permanent Collection,” James J. Hill House, 2016.