The Structure of Nature in Non-Literal Art

In the tradition of painting, artists had recorded or imitated the beauty of nature upon canvas and board. With the invention of photography, the physical world could become an image in a near instant. Notions of artists being replaced by camera machines worried artists, so they sought to foster more interest in art by abstracting subject matter, by inventing new ways of seeing people and nature. An artist concerned with the representation of nature was Charles Biederman. He won his first art competition as a student in 1929, venturing into abstract art in the mid-1930s. He sought a European painter or movement that provided a genuinely new direction for art, meanwhile mixing art styles during this search. Initially, the artist Charles Biederman denied nature as the example for the creation of modern art. He was mesmerized by scientific models of crystals and molecules, and x-ray photographs, all of which he turned to for inspiration for his paintings.

The artist Charles Biederman began painting geometric-abstract compositions to then execute as reliefs in wood. In Paris he gained the confidence for devoting himself to this technique, pursuing it upon returning back to New York in 1936, when he developed a series of reliefs. The relief medium enabled him to visualize relationships between color, form, light, and space without illusionism. Two years later he began studying engineering and semantics, which grounded his work in a new type of aesthetic.

The intent of Structuralist artists was to avoid imitating the simple appearance or “illusion” of nature and its transience, rather using the structure of nature as the base for creating art. Nature was copied not in appearance, but in the more stable laws of its activities. Such artworks focused on compositional structure, employing various possibilities via shape, color, and line. Though unlike the English Constructionists, Biederman argued that no form of mathematics could substitute nature’s appearance as a subject matter. Concrete art drew upon science, and it differed from general abstract art by excluding latent associations to nature. The concrete art movement was referred to as Constructionism, which was later renamed Structurism, and then New Art.

Inspired by technology unveiled at the 1937 World’s fair in Paris, he considered industrial materials and a geometric style best suited to his endeavor in creating a new aesthetic. Biederman later abandoned his doubts in nature as the proper springboard for creating art. This was influenced by his daily surrounding landscape in Red Wing, Minnesota, where he resided from 1942 until his passing. From painted aluminum, Biederman composed relief constructions with rhythmic arrangements on a ground of colors, later replaced with a solid colored surface. His goal with this new work was to represent nature in a non-literal manner, while still communicating its visual wealth. The resulting artworks demonstrating his theories (he composed one art historical and two art-and-Nature publishings*) were first exhibited to the public at the St. Paul Gallery and School of Art, St. Paul, Minnesota in 1954. Beginning in 1962, following exhibitions in Amsterdam, Zurich, and New York, Biederman attained one or more solo exhibitions per year, which included three retrospectives. 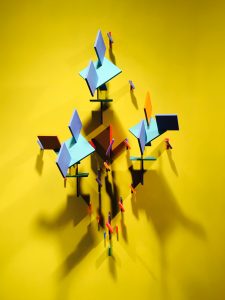 To discover more about the training and style of Charles Biederman, read his biography.
Browse art by Biederman here.