Knute Heldner was an artist who was born in Sweden and came to the United States in the early 20th century. He began working as a miner and lumberjack in northern Minnesota. These experiences helped shape Heldner’s powerful paintings of working class people. A important part of his artistic oeuvre was focused on paintings featuring lumber camps, mining areas, sharecroppers, and black southerners. Heldner would assert his political and ideological approach to these paintings. He was committed to documenting the life of peasants and laborers, and giving his subjects a sense of individualism and importance. These artworks were sensual and compassionate and further enhanced Heldner’s legacy as a pioneer for painting Social Realist artworks in America. 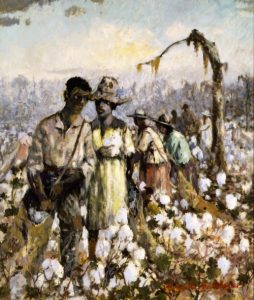 Knute Heldner’s powerful painting titled Love in the Cotton Patch features a group sharecroppers working against a backdrop of the Southern cotton fields in Louisiana. Heldner focuses the attention of the viewer on the two figures standing to the left in the foreground and approaches them with a nostalgic sensibility. Heldner is able to capture a tender and personal moment between the lovers within their labor intensive struggle. Their clothes are tattered and the warm tonal atmospheric glow of the color palette suggests that dusk is approaching and their day may be nearly complete.

Sharecropping was adopted in the south after the Civil War. Slavery was a central element to the success of the Southern economy and with it being abolished, landowners developed sharecropping to maintain profits. The landowners allowed the freed slaves to continue to work on their land for a percentage of their crops. Since the newly freed slaves had to purchase all the materials necessary to produce the crops from the landowner, the newly freed slaves would often times end up owing money to the landowners after the harvest. Sharecropping also continued the low social status of African Americans and kept them in an unfair system of debt and poverty.

Heldner leads the viewers eye diagonally through the composition with the sharecroppers to help create depth and perspective within the composition. The muted earth tones, decaying cypress tree and suffused light offer a somber tone. Heldner would often Romanticize the Louisiana landscapes with warm colors and lush vegetation, but with Love in the Cotton Patch he purposely depicts the Southern landscape in less than idyllic terms. This powerful painting accentuated the unfair treatment of African Americans in the Reconstructed South.